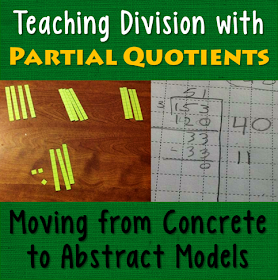 When I started teaching I loved multiplication and hated division. My students felt the same way. When I started my career as a sixth grade teacher, almost half of my class had no idea how to divide. Worse, they had no idea what division was or when to use it. Of course division was not part of my curriculum and it was expected that my kids already knew it. I spent most of the year teaching and re-teaching the procedure for long division but it didn’t seem to do much good. As the school year came to a close, I knew I had to do something different. I started reading books and signed up for a class on multiplicative reasoning and that is when I was introduced to the idea of partial quotients.

The reason I love partial quotients is because they help me move kids from a visual model for division to an abstract one. That had been what was missing for my sixth graders. They had learned division facts using visual models and sharing and grouping strategies but had never connected that to bigger numbers. Instead, they had learned a procedure that had no connection to their definition of division. Partial quotients are a wonderful tool to move kids from what they already know about smaller number division and sharing things out to an efficient algorithm.

The best way to start with partial quotients is to start in context. I like to start with a problem like “Olivia, Mason and Connor made $153 shoveling snow. If they share the money equally, how much will each of them get?” Kids can use concrete manipulatives such as money pieces or base 10 pieces to solve the problem in a hands on way. It is a sharing context which kids are very familiar with. As kids share out the manipulatives, I record what they are doing using the partial quotients structure. If they start by giving each kid $40, and then give each kid $11 more, it is going to look like this.

Other kids will start out by sharing different numbers. Some kids will even share out ten at a time until all the tens are gone and then will share out the ones. Kids who are more fluent in multiplication, especially at the fact level will tend to share out bigger quantities than their classmates who are not yet comfortable. I record the process in a partial quotients format while kids share how they divided up the money. After several pairs have shared how they did it, I let other kids take the opportunity to come up and try to record their thinking.

We do several problems in this range in a similar format and before long, I have students recording their own thinking as they use the manipulatives to solve the problem. The second or third class period we spend on this, kids start making the transition to using just the partial quotients and not needing manipulatives. The key is that they can still visualize the manipulatives if need be, use what they know for multiplication facts and move to a more efficient and more abstract strategy. I also push this a bit by having kids show their partial quotients work and have the other kids explain how many they shared first and then how many they shared and so on. Take a look at this problem. Can you see how many manipulatives were shared initially and how many after that?

Since I have moved to teaching partial quotients, kids have a much better understanding of division. They connect it to what they already know about multiplication and division facts and are ready to tackle bigger problems in a short amount of time. They continue to connect division to sharing, are much more able to solve problems mentally and can get a reasonable estimate to a division problem. Since I learned partial quotients it has also increased my ability to do mental division and to see if my answer or my students’ answers make sense.

Take some time to learn more about partial quotients and to think about how they can move your students from a concrete model to an abstract one. Make math about making connections and not about learning procedures.

Tara, AKA The Math Maniac is a K-6 Math specialist. It is her mission in life to help kids and teachers learn to think about math and not just do it.
Share